TO VIEW THE PROGRAM & FULL SCREEN: click "play" to connect to the program. Hoover over the lower right corner of the video screen and click on the "full screen" square icon on the bottom right corner to view the program in full screen. You may press the same "full screen" icon again, or the "ESC" key on your keyboard, to leave "full screen" mode. You may also enjoy the program right from your living room flat screen by searching for Music Mountain in the YouTube app. If you have a question, please email us at info@musicmountain.org
Thank you for watching!

Aired on Sunday, September 13, 3 PM EDT Peter Serkin Tribute Live from Music Mountain Live From Music Mountain, in partnership with Carnegie Hall, presents a Peter Serkin Tribute, a special length program including highlights of performances by Peter Ser kin and original conversations with artists who were close to him, including Emanuel Ax, Jaime Laredo, Jeremy Denk, and Benjamin Hocffman; Tashi members Fred Sherry, Ida Kavafian , and Richard Stoltzman; producer Marty Krystall; Milena Pajaro-van de Stadt of the Dover Quartet; composers Derek Bermel and Andreia Pinto-Correia; and one of his last students, Tomoki Park. "Peter Serkin played the first concert of my tenure as artistic director of Music Mountain, in June 2017, said Oskar Espina-Ruiz, currently serving as artistic and executive director of Music Mountain."I remember that concert very well. Nick Gordon was there too. Nick had been president of the Music Mountain board for 45 years then. I felt like I was walking among two giants. Nick passed away four months later, age 89, and Peter performed at his tribute concert in 2018, playing Brahms Piano Quintet with the Shanghai Quartet. What we didn't expect was to lose Peter less than 2 years after that." Peter Serkin passed away on February 1, 2020. The performances in the program include Air, from J.S. Bach's Goldberg Variations; Charles Wuorinen Scherzo; J.S. Bach Sinfonia No. 3 in D Major, BWV 789; Beethoven Sonata No. 29 In B Flat, O p. 106 "Hammerklavier" (Allegro); Stefan Wolpe Piece in Three Parts (I mvt) with Chamber Music Society of Lincoln Center; Oliver Knussen Variations, Op. 24; Takemifsu Rain Tree Sketch: Anton We berm Quartet for Violin , Clarinet, Tenor Saxophone and Piano, Op. 22 with Tashi and Marty Krystall, tenor saxophone, and, C. P.E. Bach Sonata No. 1 in C Major (Prestissimo). 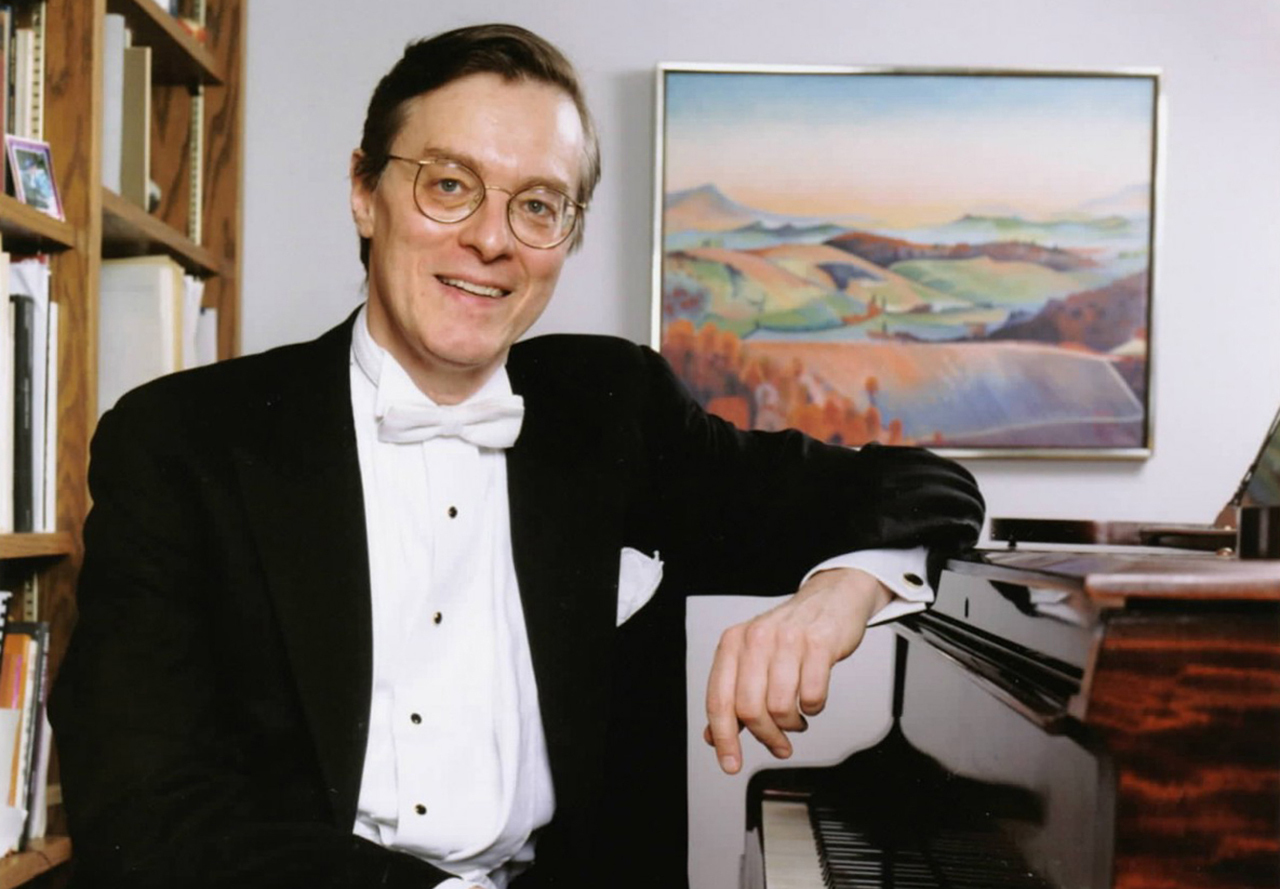 Peter Serkin held a singular place among classical music artists, admired equally for his performance of established repertoire and as a consummate interpreter of contemporary music. His music-making demonstrated keen understanding of the masterworks of J.S. Bach as well as an exceptional grasp of diverse musical styles, ranging from Stravinsky to Messiaen , Toru Takemitsu and Oliver Knussen. Mr. Serkin performed with the world s major symphony orchestras, led by such eminent conductors as Seiji Ozawa, Daniel Barenboim, Simon Rattle, and Herbert Blomstedt as well as Claudio Abbado, Pierre Boulez, and Rafael Fruhbeck de Burgos. In chamber music, Serkin collaborated with Alexander Schneider, Pamela Frank, Yo-Yo Ma, and the Budapest, Guarneri, Orion, Shanghai, and Dover String Quartets, among others. He was a founding member of the TASHI Quartet, with violinist Ida Kavafian, cellist Fred Sherry, and clarinetist Richard Stoltzman.

Peter Serkin performing at Music Mountain with the next generation of chamber musicians: Stefan Jackiw, violin, and Jay Campbell,cello

​​​​​​​Peter Serkin:
Excerpts from Tributes and Obituaries Born into a distinguished musical family in Manhattan in 1947 (his father was the pianist Rudolf Serkin, his grandfather the violinist Adolf Busch, and his great-uncle the conductor Fritz Busch), Serkin enrolled at the Curtis Institute aged eleven and was nominated for his first Grammy whilst still in his teens for a recording of the Goldberg Variations (a work which he would revisit numerous times throughout his recording career) on RCA. Two years later he withdrew from musical life altogether and spent time travellng in Asia before relocating to a farm in New Mexico with his wife and baby daughter in order to gain some breathing-space from the twin pressures of critics and his family legacy. By the early 1970s, though, he had returned to his concert and recording career with a fresh perspective, and focused increasingly on twentieth-century and contemporary music; in 1973 he founded the chamber ensemble TASH I (together with Fred Sherry, Ida Kavafian and Richard StoIzman), regularly performing Messiaen's Quatuor pour la fin du temps in unconventional locations, and in 1975 his recording of Vingt regards sur L~enfant-Jesus was nominated for a Grammy thanks to the remarkable clarity and precision which he brought to thr work. (Katherin e Coo per, Presto Classical) As a player, programmer, a nd stage personality, there was no one else like Mr. Serkin. He put his career on hold to find spiritual enlightenment, and Simultaneously embraced the period-instrument and avant-garde repertoire, with an originality of interpretation that was seen by some as an act of artistic rebellion . The scion of an illustrious family of old-world musicians - his father was pianist and Curtis teacher/director Rudolf Serkin, his grandfather violinist Adolf Busch - Mr. Serkin was decidedly of the new world . . . In classical music's atmosphere of strict performance tradition and unforgiving proscription, Mr. Serkin offered reality-bending experiences. In the pianist's last recital here, at the Kimmel in January 2019, this critic found Mr. Serkin to be a performer "who likes to rearrange time and space around him." ( Peter Dobrin, The Philadelphia Inquirer) The American pianist Peter Serkin, who died on Feb. 1 at 72, was born into a family of musical luminaries.

Yet before he could possess his inher|tance, he had to acquire it by embracing the music of his own time with a missionary zeal. While discovering his own voice, he became one of the most critically admired American pianists of the last half-century . . , Across an unusually large repertoire, from Bach to Berio and beyond, Serkin performed with a sense of uncompromsing seriousness, pristine technique, and supple in sight He was a musician 's pianist but also a pianist's musician, And in a kind of proprietary paradox, he unveiled scores with a modernist's sense of objectivity while also charging them with a deeply personalized spiritual intensity. To play classical music, he once said, was "an act of bravery." To play as Peter Serkin did - to forge not a career but a life in music so fully individualized - was more than that. It was an act of subtle defiance and singular grace.
(Jeremy Eichler, The Boston Globe) Serkin's musical sympathies were enormously broad, and though he played a huge a mount of contemporary music he never liked to be referred to as a new music 'champion', he merely felt playing the music of his time was part of his role as a musician. 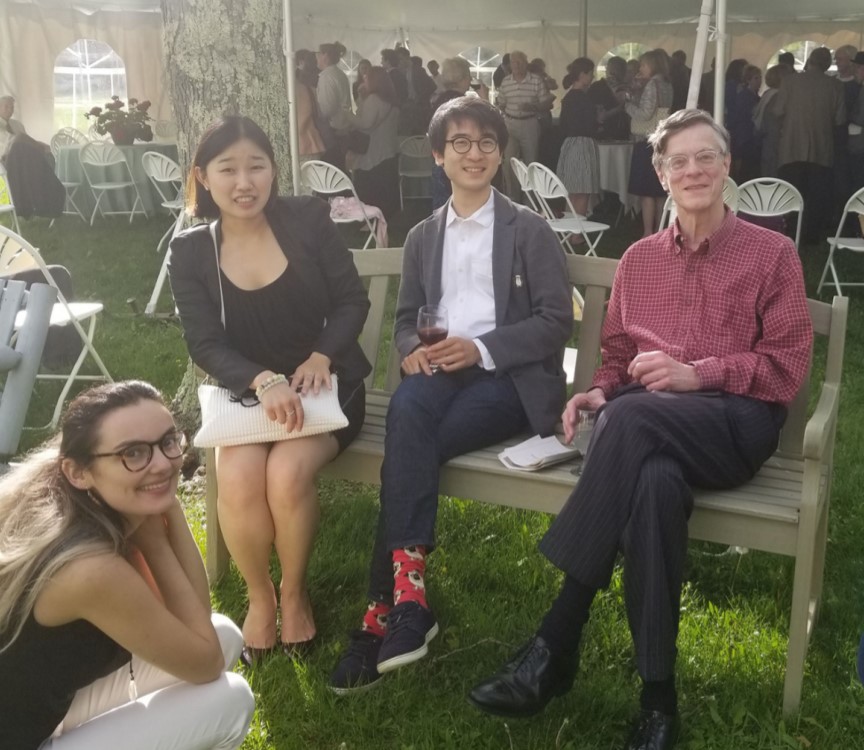 Peter Serkin with some of his students at Music Mountain [Serkin] recorded extensively for RCA, and among his finest releases were Messiaen's Vingt regards sur I'enfant Jesus ("Messiaen's harmmonic colours take on a luminous quality under his fingers, the rhythmic ostinati are imperiously compelling; the dynamic range, immense, yet always within musical bounds; the total effect,overwhelming," wrote Felix Aprahamian in Gramophones December 1976 issue), a Takemitsu programme, an album of six Mozart piano concertos with the ECO and Alexander Schneider, the Brahm s violin sonatas with Pamela Frank (for Decca) and an album of music for two pianists with Andras Schiff (for ECM New Series). Serkin was unusual among top-flight pianists in playing on both modern pianos and period fortepianos, using a Graf instrument to record the last six Beethoven piano sonatas (for Musical Concepts) . (Gramophone) Serkin's performances have been described as coming from both the head and the heart. Dinnerstein [Simone Dinnerstein, Serkin student and frequent Music Mountain performer] says he rarely played it safe. "I loved the inventiveness and varied nature of Peter's playing. Nothing was ever even, everything was vibrant and alive. 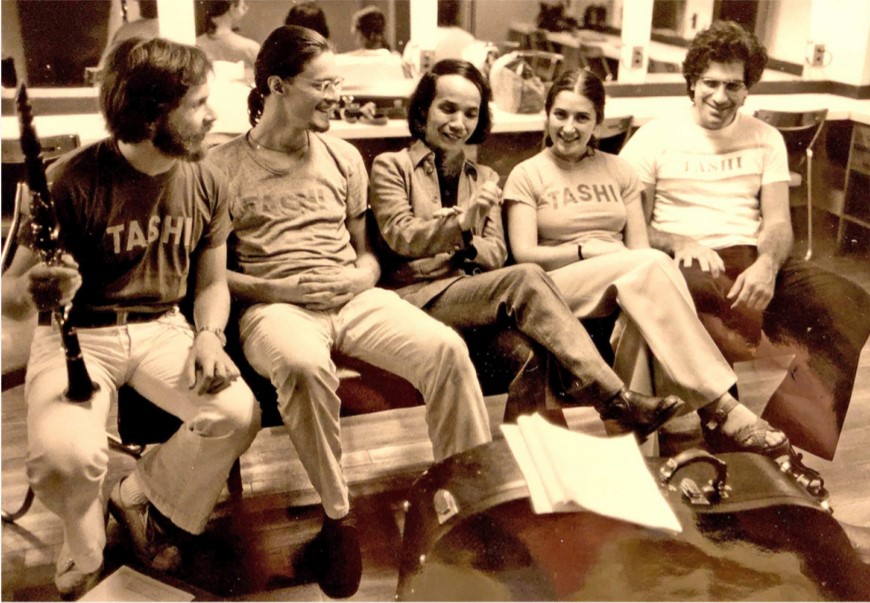 He was a towering musician, and I shall miss his warmth and his remarkable pianism and intellectual prowess. ( Pianist Sylvia Kahan) More than any other group, it was Tashi (pianist Peter Serkin, violinist Ida Kavafian, clarinetist Richard Stoltzman and cellist Fred Sherry) that brought Messiaen's "Quartet for the End of Time" to public attention, presenting it in unexpected places such as the Bottom Line. I don't think a day went by in 1976 when this didn't find its way to my turntable. You can hear it all here . (Tim Page, Music Critic) I always learned so much being around him. Thanks for the great music-making, for the fierce will and for the uncompromising curiosity. (Alan Gilbert, Conductor) 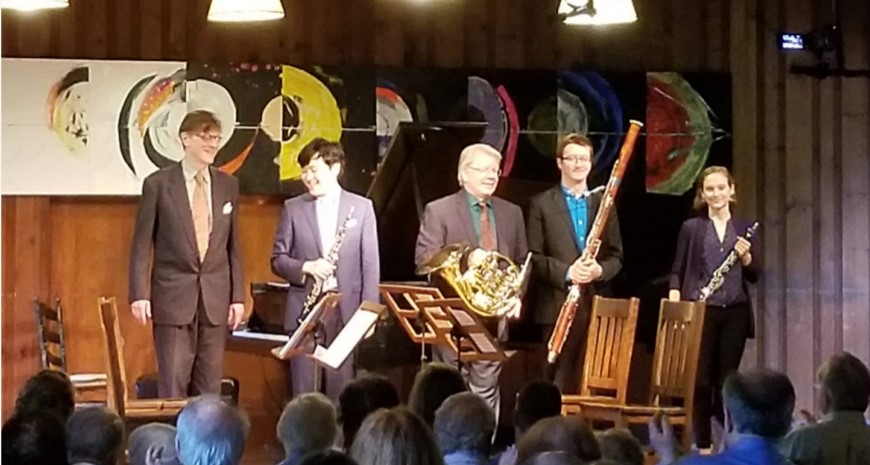 Special thanks to Carol Archer and Fred Sherry for their invaluable support to bring together the artists in this program and for curating an extraordinary playlist; to Emanuel Ax for his expertise and loving interviews, and for bringing this project to the attention of Carnegie Hall; to Abhijit Sngupta for his expert guidance and support from Carnegie Hall; to Ida Kavafian for sharing the TASHI photos; and to all participating artists (Emanuel Ax, Jaime Laredo, Jeremy, Denk, and Benjamin Hochman; Tashi members Fred Sherry, Ida Kavafian, and Richard Stoltzrfian; producer Marty Krystall; Milena Pajaro-van de Stadt of the Dover Quartet; composers Derek Bermel and Andreia Pinto-Correia; and one of his last students, Tomoki Park) for expressing with such clarity and love why Peter Serkin was such an important figure in music,whose influence remains very much alive. Many thanks to all our 2020 Virtual Season sponsors…   HERRINGTON’S and NORTHWEST CORNER GIVES, a COVID-19 Rapid Response Fund made possible by the Northwest Connecticut Community Foundation from anonymous and discretionary Community Foundation funds, including the Draper Foundation Fund, Khurshed Bhumgara Fund, Marion Wm. & Alice Edwards Fund, The Echo Valley Foundation Fund, Keroden Endowed Fund, Edward W. Diskavich Fund, Lucia Tuttle Fritz Fund, Nolin Selby Fund, and the Miriam Mason Cable Trust Fund; through the Melville Charitable Trust, through generous gifts from community members, and in partnership with Berkshire Taconic Community Foundation. Music Mountain is supported in part by the National Endowment for the Arts, Connecticut State Department of Economic and Community Development Office of the Arts, the Peter N. Krysa Designated Fund of Berkshire Taconic Community Foundation, and two funds of the Northwest Connecticut Community Foundation, Inc.: the Khurshed Bhumgara Fund, and the Lucia Tuttle Fritz Fund.